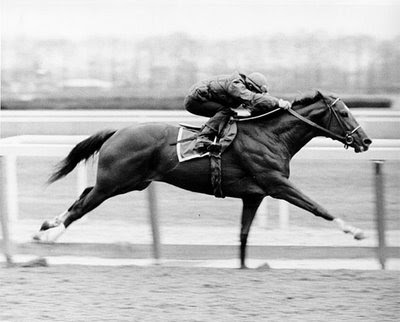 I was a year out of college when Big Red won the Triple Crown.  I remember watching the Belmont race in my Aunt Babe's basement on Long Island with family members.  It was amazing.  He was amazing.  The money shot that ran all over the world of his jockey looking backwards to see where the hell the other horses were in a 31 length blow out said it all.

We went to a screening of Disney's version of the Secretariat story last night. As many have suggested, the film  might better be called "Penny," because the movie is mostly about this extraordinary woman's role in creating one of the finest equine athletes of all time.  Penny Chenery took over the operation of her father's thoroughbred breeding farm in 1968, made the decision to breed two of their mares to Bold Ruler (one of the changes you'll see in the film to heighten tensions in the film was changing the timing of when she took over the farm shows the decision was her father's and puts her into a coin-flip that was actually his), and produced both Riva Ridge (not even mentioned in the film) and Secretariat.

I really enjoyed the film, because it does a real good job of showing how difficult things could be for a smart woman back in the late 1960s.  Penny had a degree from Smith and attended Columbia University's business school, but gave up her own aspirations for marriage and family until her father became ill.  She clearly had the training and the background to run the farm, but she gets a lot of "nice girl" pats on the head before people realize that she's a steel magnolia.

The screening audience had a huge range of attendees, from small children to octogenarians, and lots of horse people.

Watching the film, it became clear to me that Zenyatta has the same kind of effect that a Secretariat or Seabiscuit had on the public.  I firmly believe that these horses are/were self-aware.  They know/knew what they were doing, know/knew what the fuss was about, and are/were having a great time putting on a show.

I went to both of Zenyatta's "Farewell Appearances" late last year, so I've seen her in the flesh, but I couldn't bring myself to watch her actually race.  Her style would give me a heart attack in person.  I wait until the races are put on-line to watch her go from the back of the pack and destroy the souls of horses who think they are going to win.  Here on the West Coast we've been treated to the kind of disdain that happened with Seabiscuit back during the Depression--because she is a California horse, somehow Zenyatta's 19-0 record isn't really much to talk about according to the East Coast racing writers.  Are they crazy?  Or are they just snobs?

I recommend going to see Secretariat and then having a good time finding actual footage of his Triple Crown wins on-line.  Then I'd suggest watching footage of Zenyatta (the video shot from Mike Smith's helmet during training is amazing) and see what she does in the Breeders' Cup in November.  She's brought Secretariat level excitement back to racing.
Posted by M. C. Valada at 4:44 PM 1 comment: