The International Bank of Bob 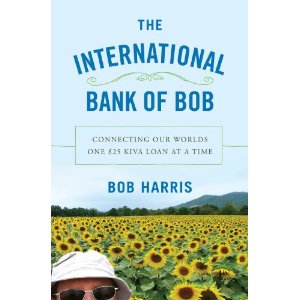 After I won my games on Jeopardy! in 2009, I decided to join my friend Bob Harris' lending team on Kiva, called The Friends of Bob Harris. Bob was already planning to write a book about his adventures in micro-financing, so by the time I appeared on the Jeopardy! Tournament of Champions in 2010, I was able to say that I was investing some of my winnings in The International Bank of Bob.

Bob's book comes out next month. If you live in San Francisco (March 5, St. Regis Hotel), Los Angeles (March 13, Barnes & Noble at The Grove), or New York (March 29 at The Strand Bookstore), there will be appearances and signings to celebrate the event. I've read two drafts of the book, and, like Bob's Prisoner of Trebekistan, it is informative, entertaining and touching. You can support your local bookstore by buying a copy there, or, if you no longer have one, order it from Amazon.

I would also encourage you to participate in Kiva. The Friends of Bob Harris welcomes new members and this link credits your acceptance to me. Be sure to designate The Friends of Bob Harris as your lending team when you join. (The designation "closed team" only means you have to make a request to join.) So far, our team of just over 1,000 members has made over 100,000 loans totaling just over $3,000,000. That puts us in position number four for all time, behind the 25,000 member Athiest and Agnostics team, the 10,000 member Christian team, and the 1500 member Milepoint team (as of today.)

I have chosen to reinvest my money as loans have been repaid. I've made loans to women in almost 50 countries, and I'm happy to say there are now loans available to fund here in the United States. I do have a soft-spot for women with horses and women artists and artisans, but my portfolio is pretty varied in terms of businesses. While I do not aspire to operate The International Bank of Christine, I do like to think I am doing my best to make the world a better place, one $25 loan at a time.
Posted by M. C. Valada at 11:08 AM No comments: