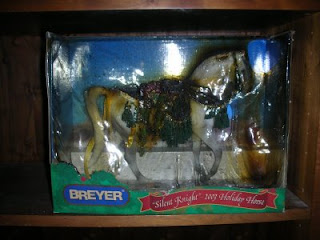 I thought I would post a few pictures of the fire aftermath. Here is one of the few Breyer horses I owned, the Christmas Arabian Knight from a few years back. The cellophane window has melted onto the horse. He's a total loss. Fortunately, the ceramic chestnut Arabian they did for a Christmas ornament around the same time was in the garage and survived just fine

In the second photograph, we have the remains of several Wolverine figures. I don't know if they can be replaced. There's one Sideshow Collectibles diorama which I found disfigured and is definitely too expensive to buy again. 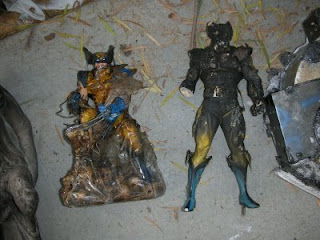 We had a bookcase in the hallway between the bedrooms. It had only paperbacks on it, some of them quite old and some of them worth a good deal of money to collectors. The third picture is what the upper part of the bookshelf looked like. There were 9 or 10 shelves altogether. The books on the lower part looked better, but only because the framed posters that stood in front of the shelf protected them from the flames. Most of them were fused together or water damaged. They fell to pieces in my hand when I tried to remove them. My insurance agent wanted me to list each one of the books. I can't even see what many of them were. 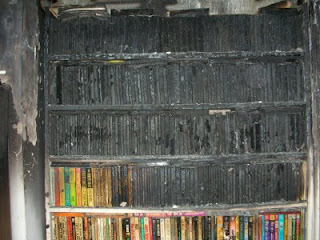 In a shelf that kitty-cornered this one (picture an L, where our bedroom door is near the angle of the bend, the shelf shown was on the underside of the base line of the L, then there was another bookshelf--Len's brag shelf, then my son's door was on the same side of the baseline near the serif, his bathroom was at the serif, the door to Len's office was opposite the door to Michael's room and kitty-corner shelf was to the left of Len's door) were a pretty complete set of DC and Marvel Showcases--hardback reprints of comic books. They were all in mint condition, complete with pristine jackets. Many were still shrink-wrapped, and they fused together shelf by shelf. 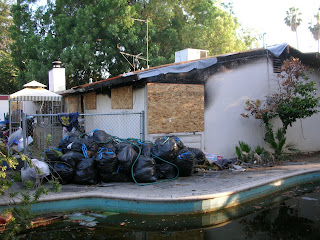 The fourth photograph gives you a sense of what the back of the house looked like after the fire. The plywood covers what used to be the windows to our bedroom. The roof rafters are covered with plastic, in case it rains. There were more than 30 bags filled with clothing, blankets, shoes, and books in the pile, and that didn't even come close to containing all of the debris. To the left of the area in the picture are two hugepiles of wood and roofing material and what was left of the furniture from the room. There were various other piles of clothing, books, DVDS, and belongings down the middle of the lawn.

I'm picturing a second story and/or a build-out that goes to where the gate should be on the fence in the rebuilt house. Maybe a windowseat looking out at the pool or a balcony on a scond level. We need the space, and if we aren't going to find a different house, we should make the most of the one we've got. It's in a great location, although I'd prefer one where I could have Ace in the back yard.

The pool is pretty disgusting, but a mated pair of mallards have been calling it home for several weeks. I don't think there's a nest--at least I haven't found one. I've startled them several times when I've walked into the pool area. It's amazing they can get themselves into the air at an angle of about 80 degrees. 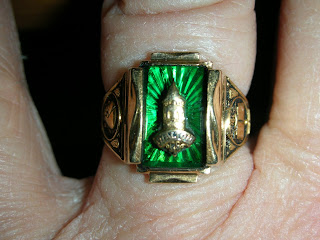 Once I realized it had to be there somewhere, I spent a lot of time over the past month looking for my high school ring. I found it in the ash near the house on Sunday. all I saw was the plain gold of the back side of the ring, and the color appears to be redder than it once was, no doubt thanks to the heat. I'm really glad I found it because it became terribly important to me that it be found. I'm still remembering pieces of jewelery that haven't been found and probably won't be: the gold ring as wide all around this one is in front that has five ovals of different colored jade, the black pearl drop necklaces and earrings we've had made from pearls we've gotten from oysters at the county fair, a lovely rhinestone bracelet, a fused-glass horse pin, the Noble Collection horse-head pin from the Lord of the Rings collection, a moon-face ear cuff and a necklace with charms based on The Hobbit from Marty Magic. A few of the pieces that wound up as silver slag were new enough that I could order replacements, but most cannot be replaced that easily. I'm hoping the Lord of the Rings piece will show up on E-bay. I will eventually take all of the silver lumps to a jeweler and have a new piece made. I'm thinking about a phoenix (ah, yes, the symbology) or a horse jumping through a hoop of fire.
Posted by M. C. Valada at 11:14 AM

Dear M.C.,
This is just awful, I'm so glad no one was hurt. But it's so hard to lose everything in a fire. I wish you well and hope you find some other things that were not damaged as you sift through the ashes. So sorry to see this. Good luck with everything.

I'm so sorry about all the damage to your home. I thought of you and Sheba when I picked up Pepper's ashes. Thanks for your kind comments. It's all so impermanent, isn't it? Certainly makes me appreciate each minute a lot more.

Things have been going reasonably well. The rental house is nice. We're getting our heads around what may still exist and what is gone forever. I'm really glad that certain items were in storage or at the barn.