Ginger has a love-hate relationship with the dogs next door.  Sometimes, she'll go out and commune with Bella, whose cage is right up against our fence, with no drama.  Other times, it's a bark-fest, with Ginger getting the last word in because poor Bella wears an anti-bark collar.

Unfortunately, the chain-link fence is old and Ginger does try to go through it.  This has resulted in some nasty wounds, and what looks like permanent scarring.  I think I should probably suggest that she do ads for the car company or insurance company with similar logos. 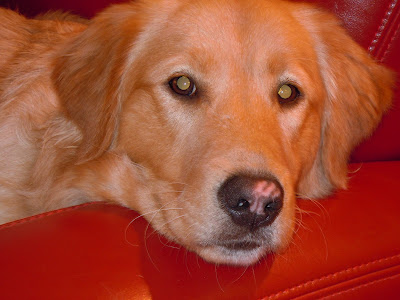 It doesn't appear to have any effect on her abilities to smell.  Last night, as we got ready for bed, she got a whiff of something in the air.  It was one of those times when we really wanted her to be able to tell us what was up.  Her nostrils flaired and she did slow arching searches of the air.  I guess she was trying to figure out vectors.  We have no idea what had her on alert, but she finally curled up without explaining it to us.  Since the house didn't burn down around us, we can rule out fire.
Posted by M. C. Valada at 10:12 AM