Lisa Jane Got Married (to Andy) 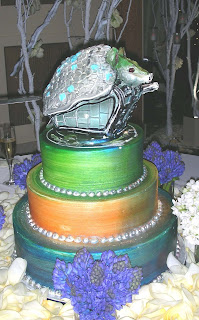 Our friends Lisa Jane and Andy got married on Saturday night at a grand event at a the "Pretty Woman Hotel." I've been to a number of functions there in connection with my law school or the bar association, but none was so much fun.

LJ looked fabulous in her mermaid gown. I whispered to her that my Barbie Doll wanted her dress back. I could also have suggested Cher. Andy, as always, looked great in his tux. All men look great in a tuxedo. Since the invitation said black tie, we were a little surprised to see a youngish man show up in something other than black tie or a suit (he was a musician who did three numbers as a favor to the happy couple) but not at all surprised that Harlan Ellison did not wear a tux (Andy said Harlan could wear a bunny suit, but he wore a nice dress suit with an orange tie and shoes instead.)

The wedding cake replicates an album cover which I think my husband identified over in his blog. As you can see, it's an armed-dillo (yes, it is an armadillo transforming into a tank.) And to think how scandalized people were when the wedding cake from my first marriage was chocolate under that white icing! We don't have normal friends, thank goodness.

Part of the fun was the photo-booth which was set up so guests could take pictures of themselves and add them and some choice words to a book for the happy couple. It's a little hard to sit on someone's lap when your dress fabric is slippery. I almost wound up on the floor.

The biggest disappointment may have been that the centerpieces were too big to be taken home by elderly guests such as myself. I'm sure I was the oldest female at our table, which is usually the criterion for these things. The arrangements were about 3' across, with white roses and other white flowers (the decor was white stick trees with hanging flowers and tea lights) sitting on water-filled pedestals that must have been three or 4 feet high. That way, you could see the guests around the tables. We did decide that kissing fish would have been a really nice addition to the pedestals.

We were so honored to be a part of the festivities and we wish LJ and Andy long, happy lives filled with much laughter. They're off to a good start.
Posted by M. C. Valada at 8:35 AM

Email ThisBlogThis!Share to TwitterShare to FacebookShare to Pinterest
Labels: Wedding