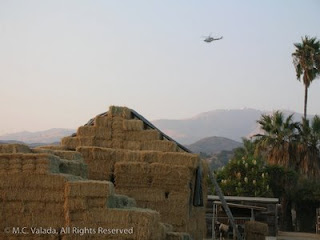 Just as I got to Chatsworth this afternoon, the news came over the radio that a Metrolink commuter train had collided with a freight train within walking distance of where I keep Ace. Helicopters were flying low and fire engines and emergency vehicles were racing down the streets. In the photograph below, you can see the railroad tracks just south of where the accident took place. The helicopter was one of eight I counted in the sky. I was standing on the ranch on Chatsworth Street where my trainer, Gayle, keeps many of the horses she trains when I took these photographs. The commuter train had just passed this area moments before the crash occurred. If you look at the map here, you can see the railroad tracks as it curves near Stoney Point Park, the actual location of the crash (you may have to adjust the size of the map to see this.) 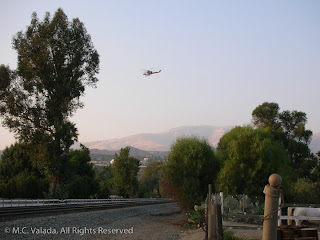 Despite the noise, all of the horses seemed to be doing just fine. Ace's barn is about two blocks from the railroad tracks, but fire engines and emergency vehicles were lining Chatsworth street and Canoga Avenue. There were policemen forming a barracade to prevent people from getting close to the crash location--even residents of the area couldn't get their cars through.

When I got to Ace's barn (on Chatsworth Street, between Variel and Canoga), after having to go a few blocks out of my way, I was told that the folks there heard and felt the impact. When I left the barn to come home, the street was being blocked off at Variel, so I may actually have trouble getting back tomorrow morning for my lesson.

It was not the afternoon I expected. As John Lennon sang "life is what happens when you're busy making other plans."
Posted by M. C. Valada at 9:14 PM

I thought about you the minute I heard that the trains had crashed in Chatsworth. What a terrible accident! It makes us realize how important it is to live our lives fully with no regrets.

Victoria: I could not agree with you more about living life to the fullest.

While the horses were fine with the noise from the helicopters on Friday evening, by Saturday morning they were all on edge. Ace wanted to be in Gayles lap or my pocket. Gayle, who lives a few blocks from where this happened, said the helicopters ran all night long as did the lights. When I arrived at the barn, I asked whether the horses had been fed, because every one of them was in its paddock looking to the north west where the accident occurred. It was more important than eating to them. I'm guessing they could hear the metal on metal scraping as the engine was being pulled from the passenger car.

There were 25 dead when I last heard, but I haven't seen today's paper. It sounded like some more victims might not make it.

I think the reason so many police in uniform converged on Friday night was because they found out one of their own was on the train. They were there to properly escort the body away.