Where Has the Year Gone? 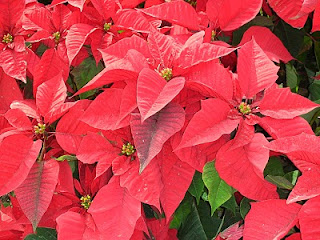 Tomorrow is the last day of work before the holidays. I'll be off until January 4. I love being able to use only two days of vacation to get 11 straight days off. If the furloughs had gone through, we would have been off for three weeks. I'm a little sorry that didn't happen, but I realize it would have been an economic hardship for a lot of people around here.

We picked out our tree on Saturday and it stands unadorned in the dining area of the rental. We tried the living room, but it was just a little too tall and scraped the ceiling. Because of the way renovations were done to the house, part of the dining area has a very low ceiling and part of it is higher than any place else in the house except for a peculiar aspect of the master bedroom bath where there's about a 4' x 4' cathedral height area. I figured we couldn't really open presents in the bathroom, no matter how big it is (the size of a bedroom, actually.)

Our Hallmark ornaments were living with a friend since the fire, so I picked them up a couple of weeks ago along with my Lenox Holiday china. On Sunday, my son and I headed over to our house to get the rest of the decorations and lights from the garage. I'm sure I'll get the tree decorated by Friday. 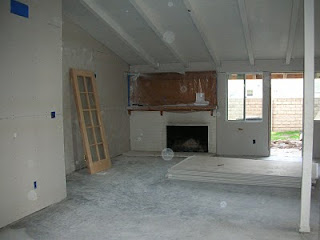 The house rebuild continues along. We've picked out tile, carpet, counter tops and cabinet doors for the kitchen. The drywall has gone up, so there are rooms again and not just bones. The first picture of the house shows the view from the kitchen through to the living room. The mantle above the fireplace was put in after the 1994 earthquake and it was pretty much the only internal wall left standing after everything was stripped out after the fire. The windows and door to the right of that, which look out onto our eastern yard used to be a pair of French doors. Now it will be a single door with windows on either side, which you can see a little better in the second photograph. 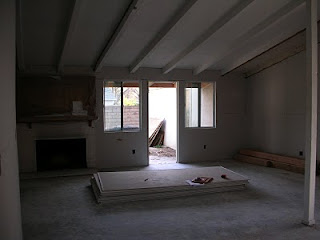 No more floor to ceiling windows anywhere in the house, which is just fine with me and the fire marshal. Also a concession to the fire marshal is a solid sheer wall to protect against the shaking we got in the 1994 earthquake. That's the solid wall on the right of the picture. It has been moved to take over space that was a narrow extension of the garage which was pretty much worthless to us for storage. It jutted out from the front of the house and did little more than collect a lot of leaves from the tree or serve as a vantage for cats who would climb up there and look into the windows which extended in a huge triangle from side to side in the front of the house from about the 8' wall level. We'll have less light streaming into the living room this way, but we've gained about 3' of length to the living room. The third photograph of the house looks back toward the kitchen area and you can see the open front door on the left and the door out to my kitchen garden. There's a lot of change going on here. There used to be a wall blocking most of this view. When we did work on the kitchen three years ago, we added a pass-through window, added a range with a big oven near where the window is (in addition to the wall oven that used to be just to the right of where the door is going to the garden), and had pull-out shelves in the bottom cabinets under the sink. In the new version of the kitchen, the sink will be under that window, the range with oven will be perpendicular and to this side of where the sink will go, the placement for the refrigerator is blocked by the wall on the right (behind which on the far side will be a pantry and on the near side with be a closet with the washer and dryer), and jutting out from that same wall will be a base cabinet with counter top to serve as a lunch counter and work space. The chairs will tuck in facing toward the kitchen. It is so much more open. And there will be a lot more storage space in the kitchen because of it.

For comparison, you might want to take a look at the blogs I wrote in 2007 when we were renovating the kitchen--something that never quite got finished. Here's a link to what the view from the kitchen through to the living room used to be before/during the make-over. That wall will be gone, replaced partially by a base-counter about 4' long. If you look to the upper right of the picture, you can see the windows that used to be in the upper part of the front wall above the door area. Here's the old back of the kitchen area where the refrigerator will now be in about the center of the wall surrounded by cabinets. The wall oven on the left is gone and the washer and dryer will be moved to their closet in the hall toward the bedrooms. And this lovely area of clutter will soon be the pantry. We only used the laundry sink to empty the washer's water and that will now have proper plumbing. I think things will be much easier to organize and put away with a proper pantry. 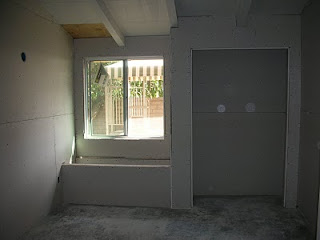 In the fourth photograph of the house is the space that used to be my office. It has had quite a bit of rearranging. When we tore up the carpet, we saw the artifacts of a wall that did make the room a fourth bedroom. When Len bought the place, those walls had been removed and the room was open to the hallway and used as a den or dining room. We used it as both at different times, but mostly it was my office. I used filing cabinets to take the place of a wall. It was crowded, but it was mine.

The room had a large closet along the left side of this picture which is no longer there. We took that, and what had been the linen closet in the hall and rearranged the support walls t enlarge the master bedroom's bath. I told Len that I would no longer live in a house where I did not have a separate vanity and storage area in the bathroom from his. While I think the bathroom in the rental is larger than necessary, I do appreciate the two sinks and vanities and I can draw a line down the center to keep his crap from invading my side. It is heavenly. The bath in our house will not be any deeper than it was, but it will be much wider, and we've shifted location and orientation of everything in it to make it a nicer space than it was.

Now the office has a closet (right) and a window-seat (left) for storage, and it still has a nice big window to look out on the side yard. I imagine some little girl sitting on the window seat with a favorite book taking her off to some imaginary land. That's what I'd do there.

Wow what a different house you will be moving back into! I hope the changes set well and you feel it as home. Happy New Year!