The Warner Bros. Television cocktail party was held on the 4th floor terrace of the Hilton Hotel on the bay. It was a lovely evening with good food and a pretty sunset. The casts of shows like The Big Bang Theory, Dexter, and Heroes, along with writers and directors were there. There was also a good showing of folks from upcoming shows, like The Vampire Diaries and the reason we were invited, The Human Target. I met Mark Valley and Jackie Earle Haley (and Jackie's wife Amelia), chatted with Jim Parsons (above), and hung out with Chuck Lorre, Bill Prady and his wife, and Brian Lowry of Variety. 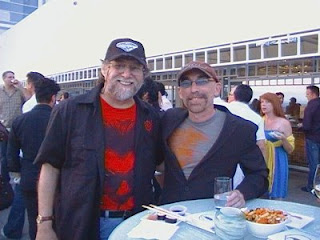 Len met Jackie (together, above) at the Watchmen premier. Len had written the Watchmen video game and Jackie voiced Rorschach for the game and played the role in the movie. He has a newly created character in The Human Target. He's a terrific actor whom I remember fondly from Breaking Away. He and his wife are really lovely people and we had a good time talking with them.

Tomorrow will be Len's busy day. Not only is he doing The Human Target panel and press conference, he's interviewing Doug Moench and doing the Ben 10 panel.

I'm planning to run over to the antique shops at Ocean Beach and get back to take pictures at the press conference and panel tomorrow. Things were so much easier before they built the baseball stadium down here (right next door to our hotel) and the antique shops were within walking distance of our hotel. But urban renewal and Ebay have combined to eliminate the shops, so now only a few remain in far-flung locations. Pity.
Posted by M. C. Valada at 11:06 PM