Going to a horse show as an owner, but not a rider, is a bit like going to your child's school awards show. It's an emotional experience when you find out other people think he's the best in his class, too. Once again, Ace stepped up to the plate and delivered for the team, making us all very proud of our pretty boy. 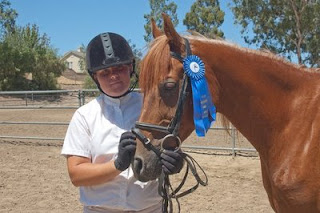 Ace looks a little sleepy (or bored) in this picture with Ashley Shrader, but maybe he was just thinking that it was about time he got the recognition he deserves. Ace's wearing the first of four blue ribbons he won at the open horse show sponsored by the Arabian Horse Association of the San Fernando Valley on Sunday in Simi Valley. Ash did a fine job of riding him in six classes and where he wasn't first, he went second and third. (In both of those classes, the win went to an Arab mare who used to be at the same barn as we were, so Ace spent time nickering at her over his back fence. She has a very nice owner who is home from college for the summer. Katie and Ashley have a long history of competing together and against each other.)

The ribbon on his bridle was for the obedience class, in which he took a second in May. Earlier that morning, he had done his first trail class--where we expected him to excel--but the results weren't given until hours later. He did win his division in trail, with no hesitation about anything. Before that class opened, and the kids were all walking the course, he did have an issue with the mail box. But he had a chance to look and smell inside and that was that. Once Ashley was on his back, it was all about the job.

He also got the blue in the open English class and the ground-poles class. Gayle and several of the other adults teased that next time we'd put him in the jumping class, but I said "no thanks." I'm not interested and I'd rather he didn't get an independent idea about it. 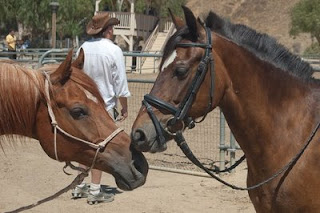 In addition to riding Ace, Ashley rode her own pony, Curious Curio (above, with Ace), in all of the cross-rail classes plus a different division of the trail class. She brought home a blue and placed in the others.

It was a fine day for all of the riders from Total Equestrian Experience, as the selection (not the total collection) of ribbons shows. Credit goes to Gayle Paperno, who's a great teacher.
Posted by M. C. Valada at 2:16 PM

Congratulations to you and Ace and Ashley for having a terrific day in the ribbons. I'll bet you are so proud of your boy, as well you should be. I'm so happy for you all. Sorry I haven't been around for a while but I've been really busy.