Saturday promised to be a busy day, and it was. I went off to have breakfast with Ginjer Buchanan, an old friend who is an editor in New York. This was her first Comicon. She was attending because one of her authors wrote the novels upon which True Blood is based.

After spending two and a half hours catching up with gossip, she went off to author-wrangle and I stopped at Horton Plaza where I picked up a black pant-suit for an upcoming event. Now I've got to find some silk shells to wear with it. I dropped that off at the room, changed my clothes, and went off to catch Len interviewing his old friend Doug Moench, one of this year's Comicon guests. Doug told a very funny story about working with Dino di Laurentis on Red Sonja. Apparently, the producer does not read English, so all of Doug's drafts were being translated to Italian. It took Doug a while to figure out that when Dino had a meeting with him and insisted there were not to be vampires in Red Sonja. Since Doug had not written any vampires in the script, he began to wonder who was rewriting his work. Then he realized that he did have a scene with leeches, and that leeches were being somehow translated as vampires. It was very funny. And I thought humor didn't translate well.

Len finished the panel and we ran off to the Human Target events, which started with a press conference where the cast, writers, and Len were shuttled in front of a variety of TV and print reporters and asked pretty much the same questions by each of them. Then we went to the room where an audience of some 3000 people were being shown the Human Target pilot, which got a great response. Len, three of the writers, and the three stars were then called up on stage for questions for about half an hour. Then we were shuttled off to the Warner Bros. signing area on the show floor. The plus-ones got to watch from the holding area upstairs.

Here's the photograph I got of Jackie Earle Haley, Len, Mark Valley, and Chi McBride as we were waiting in the back areas of the convention center to get to the Warner Bros. signing booth. 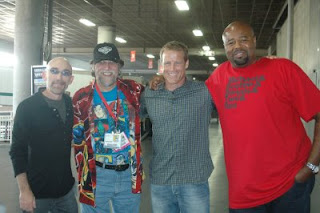