A Busy Week and Weekend 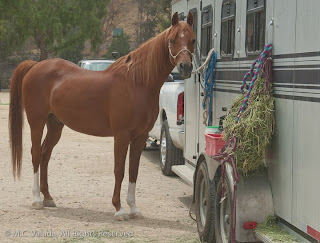 When he's standing around on his best behavior (like in this picture), you'd never know what an opinionated horse Ace can be. He's very good at letting us know something is wrong, but not necessarily exactly what isn't right.

Ace has been acting strangely ever since I went to Comic Con. While a visit from the vet/chiropractor last Sunday took care of the physical offness, our lessons this week were hampered by a mental "just not here" thing.

Ashley had a great ride with him on Tuesday or Thursday, after her own huge young horse, Waldo, almost dumped her after a big spook, a huge rear, and a turn. Ace was her comfort horse and then he took care of her when she rode him in a training lesson. Me, not so much this week.

He spooked and nailed my left foot on Wednesday while I was picking his feet on Wednesday. That did no damage because it was a quick on and off. Lucky. On Friday, while I was putting his halter on, he spooked and came down on my right foot full weight. I screamed bloody murder for him to get it off. He did the "oh, I'm sorry mom what was your foot doing there" thing, but he wasn't calming down.

Gayle was going to give him a chance to move before I got on his back, but it turned into a full-fledged join-up session. He simply refused to honestly submit. We actually had to untack him because Gayle was afraid he was so worked up, he'd stumble and go down on his saddle. (I've never, ever had to worry about Ace decided to roll when he's tacked up. He just doesn't do it.) After a long workout, we got him dressed again and I did a little work on him. We aren't use to him exhibiting this much attitude.

It may be that his little buddy the new mini got a new corral which is not as close as the old one. Or maybe there was one too many nail guns or motor cycles going off on the other side of the boundry wall. Or maybe he was unhappy that the little girl who's been fussing over him all week in camp this summer didn't come this week. She's had him all cleaned for me every day when I get there and has turned the front part of his stall into a Japanese rock garden without the rocks. She draws lines in the dirt with the manure rake, I hear. Since he doesn't speak English, although he appears to understand it quite well, we're having a hard time figuring out the problem.

He was a tired horse when he went back into his stall on Friday night, but Saturday was a new day and he was in a much better mood when I got there to tack for an 8:30 ride.

It was the best ride I've had on him in weeks. I was able to trot him long and hard for most of the half hour. At first, it was unusually choppy--his warmed-up trot is the easies thing in the world to sit--but then he got going when he realized I wasn't fooling around and he needed to get his rear legs underneath himself. I was really pleased with him and myself when I was done.

Then it was off to the hairdresser in preparation for the upcoming trip home. I even decided to try a manicure and pedicure (I earned it after Friday night) for the first time. Very indulgent. A little weird, but I'd do it again. All of my nails were about the same length and for a change that didn't mean broken below the quick. I discovered when I painted my nails for New Years that I felt like I wanted to rip my nails off. The polish made them feel funny, like they were suffocating. I don't know how else to describe it. Someone else said they think polish makes their nails feel heavy. I'm glad it is not just me. I decided I'd risk a clear coat, but nothing more. So far, so good.

So my hands looked great for about two hours, until I chipped one of the nails at the bowling alley fundraiser for Horse and Pony Rescue Ranch, Inc. , the non-profit that Gayle and some of her students set up years ago to help place unwanted horses. I had a good time anyway, and was glad to get my husband and son to come out and socialize at a horse-related event. A couple of our friends joined us and we managed to bowl two games in the two hours.

I'm a lousy bowler, but even I managed two strikes and a couple of spares, along with a large number of gutter balls. This morning my right hand, arm and neck hurt from using muscles I don't normally encounter. I'm really pleased that between the folks bowling, pledges made to sponsor the bowlers, and raffle tickets, HAPRRI got about $350 towards horsekeeping expenses. If anyone is interested and has the spare cash to make a donation (and I know what that's like these days), here's a link to HAPRRI's website.

Today, I'm doing laundry and packing for my trip, because later we are off to see Julie & Julia, tomorrow night I've got team trivia, Tuesday night we're attending the taping of the first episode of the season of The Big Bang Theory, and Wednesday, I've got to see my chiropractor and Ace right after work before I go to the airport for the red-eye flight to New York. Busy, busy, busy. But so much fun.
Posted by M. C. Valada at 9:04 AM