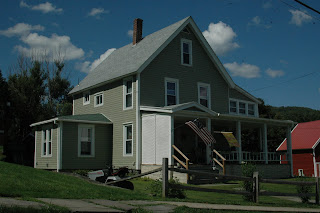 I am in some other when.

As I drove up Route 17 to attend my high school reunion, I found myself drawn to things I hadn’t thought about in ages:

There was the house that Gary Catella, another friend of his, and I went to, looking for help after Gary’s car broke down on the way home for Christmas vacation in, I think, 1969. Driving to get us meant my parents were late for Dad’s office Christmas party. Boy was he pissed. Turned out, someone had put sugar in the gas tank of ’s car. He spent the three weeks of vacation rebuilding the vehicle.

There was the exit to I got about 500 yards past when my aunt’s Volkswagon Beetle stopped working. The engine seized up when all the oil leaked out. My uncle told me that it was using “a little oil,” which is a different warning than the one I needed. On old Volkswagons, the oil warning light came on after all the oil was gone. The message it gave was “too late, you idiot.” I had borrowed the car to go home for a weekend in my last year in college when my mother was having some vision problems. Once again, Dad had to come and get me. The other thing I remember vividly about that trip was I was wearing suede-cloth hot pants. My legs were better in those days, but it was not a good choice for being stranded along Route 17 unless I wanted a whole lot of trouble. I didn’t. In the days long before cell phones, it took a while for rescue when I thought it prudent to reject several offers of “rides for help.” Eventually, I walked the 500 yards back to the exit and called AAA and my father.

There was the Roscoe Diner, a land mark for anyone who ever had a friend going to college in Upstate New York. It was THE watering hole, an hour from the nearest college city of any size and the last stop before getting on the highway to head back to and . It looked bigger than I remembered it, but I’ll bet the owners are still Greek and there’s a Greek salad on the menu. Today, I just stopped in the parking lot for a catnap before the final 20 miles of my trip. On Sunday I may stop in to see what swag is available.

I drove past one of ’s water sources, a reservoir that was built before I started school. It was very full. I’ve seen years where the water was so low you could see the remains of some of the towns that were flooded over. There are two of these reservoirs within 10 miles of my home town, in opposite directions. Daddy used to take us fishing there. I haven’t been fishing since I became old enough to need a license. My brothers now take their kids fishing in the same places when they go to visit my mother.

I pulled off the overview on the mountain going into town, expecting to take a picture of the valley below. The trees are all grown so tall that there is no longer a view. I noticed that the other view hill seems to have the same problem, and that road is a lot more treacherous. So much for a picture of the town, I guess..

When I got to town, I did a drive around before heading to my mother’s house. The first home my parents owned looked quite nice (above). It’s been repainted and it is nicely maintained. There’s now a terraced retaining wall in front where I just remember a grass hill we would roll down—and the day my 2 year old brother stripped off all of his clothes so he could get sprayed by the hose Daddy was using to clean the car. I remember Dad chasing my brother who immediately realized that standing naked was probably not a good idea.

Tomorrow, I will take the time to walk down town and visit some of the many antique/junk shops that have taken over what used to be a Newberry’s, Five and Dime, a jewelery store, and the Western Auto. What was my grandfather’s jewelry and barber shop (and was later his liquor shop) is empty, with a for-lease sign on it. For many years it was an extension of the clothing store on the corner. That too is empty.

The National Bank is still there, but I didn’t notice the full name. No doubt it is owned by some bigger banking corporation. The big surprise was the McDonalds. Mom said it’s been there a while. And I saw an ad for a Subway. I never thought that fast food franchises would ever find the town.

The town library is as beautiful as ever. Rumor has it I can get on the Internet there, which I will check out in the morning. I’ve had no luck posting anything from anywhere today. I’d feel like I’ve gone off the edge of the universe except I know I can get in my car and leave and Keith Olbermann and Rachel Maddow were on TV tonight. Unfortunately, I discovered my mother’s choice of “news” is the Fox channel, because when I turned on the TV, the odious Bill O’Reilly’s face and voice came on. I couldn’t wait too change the channel.

Hi, My Name is Gail Travis. I was shocked and excited to see that you were from Walton, NY while I was watching Jeopardy!! I went to school in Hancock but my whole family lives in Walton and my parents just moved back! My dad is the Pastor of the Northfield Community Church between Walton and Sidney. My parents/ family probably know your family, such a small town!! Great Job and Congratulations!

P.S. when I was little I used to walk to Newberry's all the time, I lived right across the bridge!