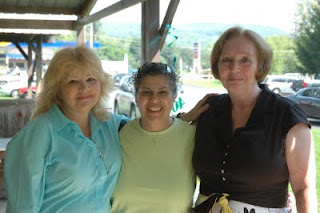 The reunion has been fun. Actually, it has been perfect.

My friend Gloria (on the right, above), with whom I reconnected because of this blog, managed to get here. She flew directly from , where she was on business, to JFK, where her brother picked her up and drove her home. She got in about 4:30 this morning and I think that she’s lucky that the time differences worked in her favor coming here.

She looks just great, and we’ve had a fine time catching up. She left mid-way through 8th grade and moved to a small town about 60-90 minutes away. When you don’t drive, that’s just as bad as going to the far side of the moon. I saw her only once after that. I invited her to a party the summer after we both graduated and she came. I am so glad we have reconnected. Her granddaughter is into manga and anime, and is planning to be at the convention where Len’s a guest next month. Gloria is going to instruct her to be sure and go up to Len and introduce herself.

My other best friend, Valerie (center, above), from those days was here with her (relatively) new husband. He’s a little on the quiet side, but that may just be because plus-ones are at a disadvantage at a reunion, unless they went to the same school.

Even with nametags and pictures, it is a little hard to recognize people or remember exactly who they were. Sometimes, there’s the moment when you see a 17 year old face peeking out of middle age and sometimes (like people say about me) it’s because you see their parent’s face.

It’s been fun, but frustrating to be unable to check e-mail or post. When I get back to my world, these posts will be going up one after the other, and now I’ve actually got pictures to go with them. Folks suggested I drive around looking for unsecured wi-fi, but I just can’t bring myself to do it. Things can wait until I get to tomorrow or on Monday.

There’s one more gathering to attend: breakfast tomorrow. I’ll leave after that. It’s about a 3 hour drive to , so I’ll get there plenty of time before dark. I might even stop to buy a swim-suit—Audrey and Michael have an indoor pool. That’s not necessarily an advantage this time of year, but I will always remember being there in the heated pool in January, with a fire in the fireplace, the lights off and the snow coming down outside. It was bliss.

I have been lusting after those full-seat Eq jods ever since I saw them. Now you have some! I must die. Or else break down & buy some too.

Yes, I couldn't bring myself to pass them up. Especially since I got them without paying local sales tax, since I had the other items to ship back to California. The ones I bought are black on black, so I think they're not the best choice for summer out here, but they do look so nice. I got a message that I should have my other two pairs by Monday. Hooray. I've only got the navy ones right now. Plus the jods I'm saving for special occasions.